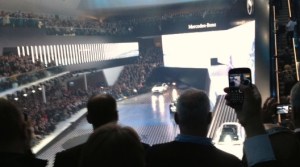 Frankfurt is a show of strength for the German motor industry: the local car companies have their own halls, each of which would accommodate an entire regional motor show.

For the last couple of events BMW has had a driving circuit in its hall, snaking around above the floor displays. Audi had one at the last Frankfurt event too, so this time it went for an upside-down night-time metropolis hanging from the ceiling. Why? No idea. But as VW Group’s premium volume brand, which has overtaken both BMW and Mercedes, it gets its own hall, separate from VW’s other seven car brands, and has to do something different.

But it’s still Mercedes which dominates. In the domed Festhalle building, opened by Kaiser Wilhelm II in 1909, it creates an extravagant world over three floors which is impossible to ignore and equally difficult to escape. Its press conference, allocated 45 minutes – longer than any other – attracts most of the 10,000 attending media. Almost no-one can see anything but, more important, once in you can’t leave.

Take the escalators and you’re on the top level and can descend only floor-by-floor, looping past endless displays like a nightmare vision of an automotive supermarket. But when there are 10,000-plus people standing, waiting for a press conference, unwilling to move an inch, you’re stuck. No chance of going down the stairs, and one lift for staff only.

I’m not sure what German Health and Safety’s like, but if there had been a fire or a security alert you may as well have reclined a seat in one of the new S-Classes, turned on the back massager and hoped for the best.