The Geneva launch of the three mini cars jointly developed for Toyota and PSA Peugeot-Citroen was interesting not just to see how they’ve differentiated them in styling terms. Their execution tells us a lot about the brands whose badges they wear.

They may be diminutive, low-priced and low-profit products, but they’re a valuable entry point for new, younger buyers, offering the opportunity to grab customers at the base of their car-buying curves. 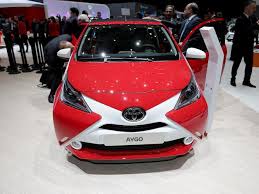 So much so that Toyota’s version, the Aygo, is intended to be a halo car for the brand. It effectively spearheads a new Toyota brand message of Fun, but it also spells out a new daring in the company. The Aygo is certainly the most distinctive of the trio. Sharp-edged, geometric feature lines come together in an X-shaped front-end graphic extending from the bottom corners of the nose right up to the wing mirrors, and along with some other plastic parts it can be chosen in a range of colours. This is Toyota trying so hard to break out of the rut of bland, commoditised design that it’s willing to engage in jeopardy – witness the Go Fun Yourself strapline used on the Geneva stand – and even risk alienating some buyers. It’s something the company can’t do in a single move with staple volume sellers like the Auris and Avensis. But if the Aygo’s a success it will allow Toyota to progressively introduce more risky design.

Citroen is in almost the opposite situation. Launching its cartoony C4 Cactus concept-car-for-the-road at the same time, its C1 alternative to the Aygo inevitably doesn’t have the same halo mission. As a result it lacks the confidence of the Toyota and the coherence of the Peugeot’s version, the 108. Citroen has a wonderful brand heritage of free-thinking innovation, idiosyncrasy and design flourishes, which it’s redeployed in the Cactus and the DS ranges. But it also has to market pain-et-beurre cars, and to do so cheaply to make them attractive. The C1 is symptomatic of this split personality, its front end a confusing mash-up of cutesy oversized lamps and Citroen’s new signature slim headlamps.

The Peugeot 108 may be more conventional but it’s more successful. Peugeot has a new-found confidence, with good design and excellent quality now extending across a young vehicle range, so it’s transplanted those values into the 108. It wants to be taken seriously so has used the car to give us a large-car-in-a-small-car package, with plenty of options focused on luxury and technology, giving a visceral quality to a sophisticated-looking city vehicle.

These three cars are being produced in the same factory but despite fundamentally being one vehicle they’re remarkably distinct. The Toyota and the Peugeot, however, share something which elevates them – they project a clarity of purpose and a fit with a wider corporate vision. In brand terms, that’s essential.