Despite the fact that motor shows are a paradox – where technically cutting-edge and brilliantly designed machines which move us physically and emotionally are parked up in large, soulless indoor exhibition spaces – you can often tell as much about a car brand from its stand design and execution as you can from the models on display.

At the Geneva show Volvo demonstrated its brand transformation not so much in the Concept Estate car (despite the fact that it elicited more “I want one” comments than any other car at the event – yes, for a Volvo estate) as in the design and atmosphere of its stand.

After years of being sub-premium, a sort of no-man’s brand, the XC90 SUV gave it relevance once more, and the confidence to become not so much premium as Scadinavian. The brand now sits in its own space, transcending the stiff aspirational appeal of the big boys, and genuine practicality and cool Scandinavian design principles combine with a sense of enlightened independence to define the new Volvo.

This is now built into its crisply designed show stands not only through clean lines, neutral tones and contemporary materials, but by creating a guest area drawing its influences from a stylish Scandinavian home, with an informal mix of modern decor and design classics. items. The range of reference implies that the brand values are embedded in the culture of the business. So few brands do it.

But the stand-out feature was that Volvo used Swedes to serve the coffees – not people hired in locally, not traditional motor show smile-and-move-on hospitality people; these were young, relaxed, confident men and women who didn’t talk to you about the company or its products, but talked to you as they would in a Stockholm bar or Apple outlet. It’s hardly radical – after all, a business’s culture should always start with the staff. But it’s human, and it’s real – exactly where Volvo should be. And it works.

It’s ironic that as Volvo has passed into Chinese ownership it’s rediscovered its inner Scandi. If Geneva was anything to go by, VW’s Spanish value brand SEAT is going the opposite way. Some desperate recent years saw SEAT slip from aspiring to be a Spanish Alfa Romeo to the bottom of the VW pile, way behind the ex-communist Skoda. It’s made losses of Euros 1.5 bn since 2005. But it 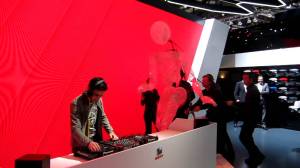 persevered with its Spanish party-time image, and late on motor show press days would always bring out the tapas and Rioja and turn the music up. Club music, one time with Ibiza DJ and Cafe del Mar creator Jose Padilla on the decks, another time young F1 driver Jaime Algersuari. The rest of the VW brands could only look on jealously from their corporate car parks.

The stand party didn’t happen at Geneva 2014. The last 12 months has seen SEAT rebuild its sales, and its new Leon lower-medium car is being praised as a genuine alternative to the market leaders. European sales were up over 10% in 2013, including 22% growth in Germany. There’s a new boss, and he’s German. Things are looking good. But they’re also looking less Spanish, less distinctive, and every other brand out there has good products.

You hope that this is more down to VW’s group cost-cutting than a brand repositioning. Because buying habits are changing, and there won’t be enough room in the VW portfolio for four serious but identikit mainstream car brands indefinitely.