One final brand thought on Geneva: what was the most significant car at the show? Renault’s re-born and RWD Twingo? Mercedes’ high-tech C-Class? Citroen’s unique C4 Cactus? BMW’s first FWD car and MPV, the Active Tourer? VW’s e-Golf? Peugeot’s newly crowned Car of  the Year, the 308?

No – none of those. But, like the Golf and the 308, it was a humble compact family car. The most significant new car at Geneva, from a brand perspective, was the Qoros 3 Hatch. Why? Because it begins to move China on from being the car market which drives the global industry to being a marketer of cars we’d actually drive.

Yet this is good design – form has met the function of expressing solidity, integrity, an engineered product. It reassures. The cars have shoulders, a stocky stance. There are no design gimmicks. They look substantial, not Chinese: from a nation which until recently produced blatant copies and cheap crash-test-failing boxes with bizarre names, this is a very necessary brand message. The products say “VW”, not “Great Wall, “Gleagle”, “Roewe” or “King Long”. 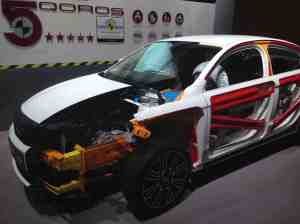 And now that suggestion of substance has been made real. Sitting unheralded behind the production-ready Hatch on the Geneva stand was a semi-naked Sedan showing its crash structures. The car not only got a five-star rating in the Euro NCAP crash-test, but achieved the best score of any car in 2013. That takes a clear vision, commitment and investment.