Earlier this month I was a guest of the UK’s Department of International Trade on a low-carbon vehicle trade mission to California and Mexico.

With several days in LA to start the trip, the city of dreams inevitably set the tone. It’s hard not be smacked around the face by this extraordinary place. The real positivity, the relentless politeness, the universally terrible coffee, the ubiquitous fast food, the homelessness, the vast wealth spilling over the Hollywood hills. But most of all the traffic. The extraordinary levels of it, spread uniformly across the expanse of this vast urban sprawl. 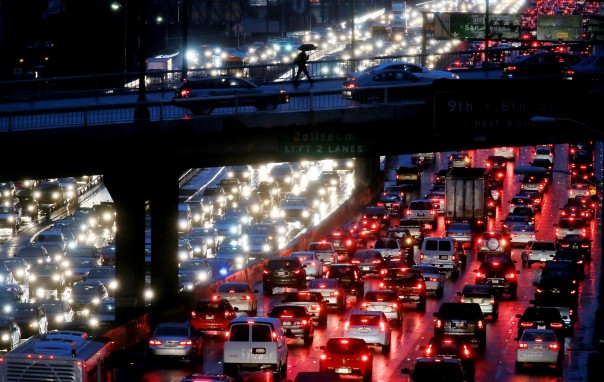 This is a city with no centre. Arteries don’t run into and out of a metropolitan heart as they do in older cities. LA is a giant grid which people criss-cross 24/7: more than in probably any other western city the population works around the clock, servicing everything from the entertainment business to the fast food industry. Property prices and wealth inequality mean that people often live a very long way from where they work – even for relatively low-paid jobs they commute, say, 30 miles, and they drive it, which can take a couple of hours. Hardly anyone uses what public transport there is. The nearest anyone from the professional classes gets to public transport is Uber. It’s a default option which only adds to the traffic: effectively a single-occupant car, usually with a large internal combustion engine. Uber and Lyft are simply increasing the car dependency.

So in spite of California’s environmental commitments LA is very definitely not the cool low-carbon city of electric vehicle advocates it’s sometimes painted as. Yes, there are plenty of Tesla’s Model S around (although few Model Xs, and I saw just one Model 3) and a good sprinkling of Chevvy Bolts. But pure EVs and hybrids like Toyota’s Prius are vastly outnumbered by giant gasoline-driven SUVs, ancient V8s, V12-touting Lamborghinis and Rolls-Royces, let alone the humdrum everyday transport of ordinary folk: if you want to spot Hyundais, this is the place to come. LA is a city in love with the motor car. Any car. 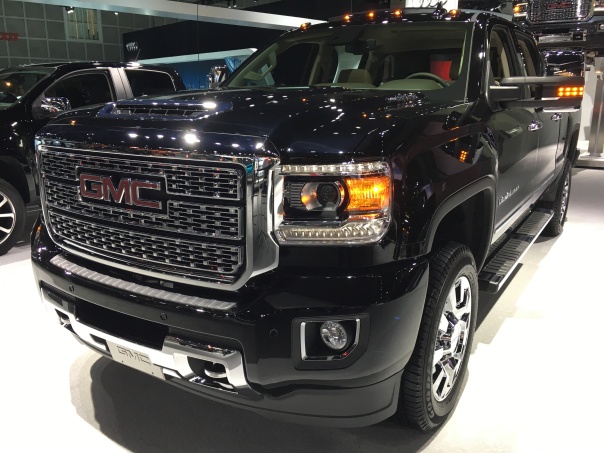 It’s simply not realistic to change this mindset. This isn’t Silicon Valley, where utopian business ideas are dreamt up in people’s garages and grow into multi-billion-dollar global disruptives. Currently LA is really the old model, a glittering outpost of Detroit. We visited the LA motor show and its eco off-shoot, Automobility LA, and they echoed echoed this: the latter was, at best, work in progress, the former much like any other motor show (but with more old-school gas-guzzling models). Where were the disruptors? Lucid? Faraday? Nio? Fisker?

The major car manufacturers don’t want the mindset changed – yet. They know that their existing business model is approaching the end of its life, but it’s fine while it still works and until legislation necessitates the change; mass market demand only ever comes into the equation late on. Meantime the carmakers don’t provide attractive low-carbon options. Why should they? EVs are expensive to engineer, mean disruption to manufacturing and retail processes, and offer reduced margins. 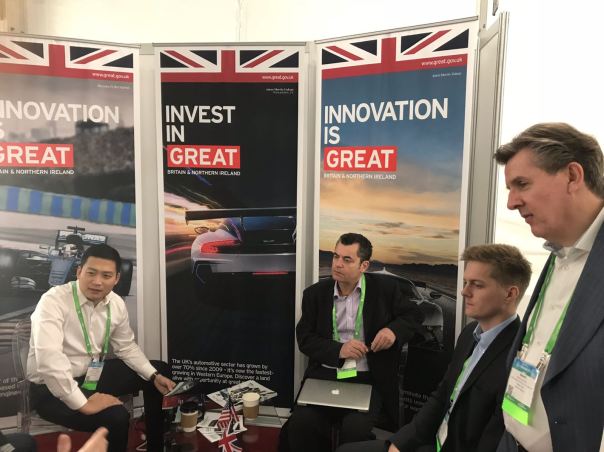 It’s in this context that those involved in the low-carbon trade mission can be a factor – smaller companies and start-ups, technologists and innovators, suppliers and integrators. While the major carmakers have a vested interest in slowing things down, these other businesses can be catalysts, forcing change from the bottom up.

Los Angeles can play a big part in this. It’s a bridge straddling the lets-change-the-world optimism of Silicon Valley, San Diego’s low-carbon commitment and the pragmatic ability of Baja Mexico to productionise low-carbon tech. And it’s got a huge potential customer base, vast wealth and international influence. 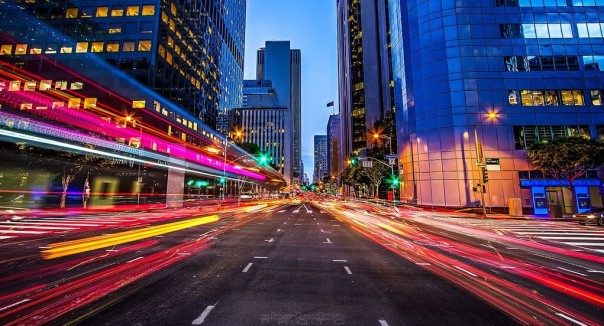 LA is also quite possibly the model for a major modern city struggling to eschew old ways and acquire new, more sustainable habits. Yes, it’s more extreme than New York, Paris or London, but most of the problems are the basically the same: too much road traffic, unattractive public transport, very little low-carbon choice. If LA can do it then so can others. We should all keep watching.

Audi, the recent king of volume growth among premium brands, is about to be overtaken by Mercedes and slip to third in global premium-car sales.

It will be a big change from just a few years back. Mercedes was overtaken as number one by BMW in 2005, and was replaced as number two by Audi in 2011.

And last year, in Europe, ended with Audi as Europe’s number one premium brand. But Mercedes, with a dramatic product offensive, industry-leading quality, a turnaround in China, punchy marketing, domination of Formula 1, steadily growing profits and record sales, is on its way back to number one here too, quite possibly by the end of the year.

So this is a significant moment.

Paradoxically, it may be Audi’s very drive for volumes that’s seeing it slip behind Mercedes and BMW. Last year it was the 6th-highest selling brand in Europe overall, and fifth in the UK, where its volumes approach twice that of Toyota. It’s done this by storming into new segments, fuelling new niches, and aggressively invading mainstream territory.

It has trumpeted the number of models and derivatives it offers, talking of an extraordinary 60-plus model lines. So there’ something for absolutely everyone, and ultra-low interest rates have meant that anyone can get into an Audi, including people who may have only ever had cars from mainstream brands. If you can lease one for the same as a Nissan, Toyota, Renault or Ford, why wouldn’t you?

So how can all this lead to a slowing of sales growth? It has unavoidably become commoditised, but more importantly it has become complicated.

With such a vast product range, what’s needed is simplicity. Audi has a wonderfully simple and recognisable graphic identity, and product design which shows a confident simplicity. Design and engineering teams across all car manufacturers are engaged in delivering a sea change in how we interact with our cars, through the integration of connectivity and the emergence of autonomous driving systems. The human-machine interface is having to be transformed in order to deliver such complex technology seamlessly and intuitively.

But the same drive towards a necessary simplification of these for the user has not been applied to distribution and retail operations, and how the car manufacturers present their products.

Is there anything less intuitive than navigating vast product ranges of SUVs, crossovers, off-roaders, soft roaders, sportbacks, liftbacks, hatchbacks, high-riding hatchbacks, low-riding SUVs, SUV coupes, people carriers, sports tourers, sportswagons and estates? This doesn’t help the consumer. And in this respect the premium brands are failing delivering an appropriate brand experience at a critical point in the customer journey.

In brand consultancy Siegel+Gale’s last Global Brand Simplicity Index, Audi, Mercedes and BMW were all categorised as ‘low score/high premium’, meaning that “They need to simplify their brand experiences, and they’ll be able to reap significant rewards if they do”, according to the report. Tellingly, only Ford – a mainstream brand which has simplified its product portfolio – was in the ‘high score/low premium’ category, for brands already seen as simple and needing instead to focus more on showing the value of the simplicity they offer. Ford was also the only car brand to make it into the world’s top 40 brands across all sectors, in an impressive 17th place.

It’s clear: by expanding their product ranges so fast and so far, the German premium brands have made a rod for their own backs. Mercedes, in 44th spot, is doing better than BMW and Audi, in 65th and 66th places. But it’s humble Ford which leads the way, and ironic that Audi’s mainstream VW parent brand beats it in all the key markets.

It’s a picture reflected in how these brands fare in the UK. Ford is streets ahead at number 19 in the list, with Mercedes at 59, BMW at 81 and Audi at 89. And in the USA, not one of the German brands makes it into the listing of 125 brands, while Ford is at 24.

Look more closely and you see that, in the UK, Audi is the only car brand classified as ‘low score/high premium’, emphasising the gap between where it is an where it could be. But you’ll also see that BMW dropped 15 places in the latest GBSI. That followed another nosedive of 23 places the previous year in the global rankings, and a remarkable fall of 35 places in the listings for Germany, where the native car brands normally perform far better than they do elsewhere.

So BMW, right now still the highest-selling premium car brand around the world, tumbling down the order. An anomaly, surely? I don’t think so. Audi has been the most aggressive of the three German premium car brands, but BMW was first to attack the mainstream when it pushed the 3-Series hard into fleets in the last decade, effectively making it an upmarket Ford Mondeo. Mercedes followed, with extremely aggressive lease pricing, and paid for it; Audi has merely taken it to the next level with its model proliferation, while BMW has tried to do the same, but has introduced a number of unloved, neither-fish-nor-foul models for tenuous niches. It has lost brand focus and the GBSI reflects that.

And this is the real significance of the current shift among the German premium brands: Audi and BMW may come to be glad of their soon-to-be status as numbers two and three in the premium sales charts. They could focus more on other ways of achieving success, like customer retention, car-sharing and on-demand mobility, to better fit consumer needs in a world where Apple, Netflix and Uber have set new paradigms for consumption.

Volume for volume’s sake is the enemy of the premium brand. Simplicity, clarity, vision and a better brand experience are its friend. Achieve that and the volumes will follow. 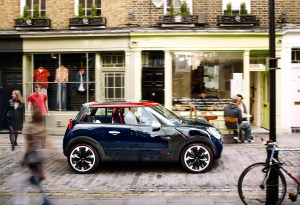 The strongest statement by any company at the Geneva motor show has been made by one which isn’t even there.

By skipping Geneva MINI is underlining that it’s the holy grail for car companies – a generic lifestyle brand rather than merely a car brand.

Yes, it will still appear at motor shows, but they will largely be those held in the most cosmopolitan centres, like New York, not the ones in corporate and financial centres like Geneva.

And of course it will increasingly put itself in non-automotive environments, where fashion and technology coalesce, where other lifestyle brands are present, and where people go to consume and experience rather than go from stand to stand in an exhibition hall. 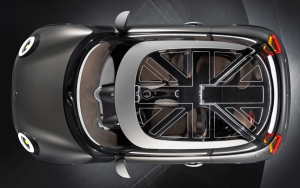 It’s something we all engage with on a daily basis without even registering it – every smartphone is highly personalised, not so much by covers and wallpapers as through the apps we choose. MINI knows this: the car of the future will be personalised through use of technology, not just paint and trim.

Other brands, from Volvo to DS, claim lifestyle status, but these are the ones which have been forced to reinvent themselves. The rest pay lip service or remain wedded to the same old formula, MINI’s parent BMW brand included.

In an era when retail is being transformed by digital, and with the consumption of personal mobility by young and urban populations likely to change radically, MINI is showing the mainstream car brands the way to go.