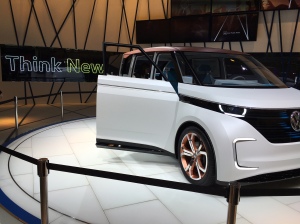 In a year when the Geneva motor show has seen world premieres of new production cars from Bugatti, Lamborghini, McLaren, Aston Martin, Porsche, Jaguar and Mercedes, the most interesting thing there is something rather different.

No, it’s not an accessible sports car like the Fiat 124 Spyder. Or a family car which is simultaneously stylish, like the Renault Scenic. It’s not even a vehicle system or component.

The most interesting thing at Geneva International Motor Show 2016 is the VW stand.

Why? This is the first time VW has presented itself to world since it was engulfed by the diesel scandal last September. Since then it has replaced the top tier of management, made big commitments to low-carbon product and gone on a direct marketing charm offensive in the markets. 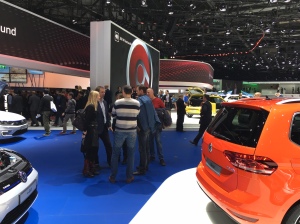 The company’s presence in Geneva is noticeably more human and warm than the usual giant white car park stuffed full of mundane mainstream models. There are semi-separate sections with constantly morphing mood lighting, Beats Audio listening pods and a giant screen snaking across the stand. Everyday models are displayed in bold colours, not just white, and there are two new concepts which tell us how VW wants us to see the brand: forward-thinking/eco-friendly, and fun/adventurous.

The Budd-e mini people-carrier isn’t as lovable as the Campervan-referencing Microbus of a few years back but it’s electric, clean and modern – what the brand needs to be. It also sits in front of an illuminated backdrop saying ‘Think New’: this is a company which very obviously knows it needs to renew itself for the public gaze. The T-Cross Breeze signals the smallest of three new SUVs, and here it’s in a not-for-production convertible form – this company, they would have you believe, is full of fresh air.

VW has put in some fast work in the last six months. None of it sweeps the diesel mess under the carpet, and customers with “defeat device” cars – me included – have been treated with disdain. But life at VW goes on.

I won’t be buying another VW, yet millions will without wincing. And that is its banana skin. Will VW’s need to change perception make it truly redefine itself and become a real brand again – the one which was founded on the Beetle people’s car? Unlikely. But as a brand professional I’m fascinated to see which wins out – the need to be trusted and valued or the need to stave off the financial cost of the scandal with volumes-driven profit.