Most reports of the 2015 Geneva Motor Show, which opened its doors last week, have adopted the view that it’s primarily about the exotic supercars. It’s not.

Yes, there were new supercars from Ferrari, Aston Martin, McLaren, Lamborghini and other exotic brands. Even the mainstream crowd was at it, with the revival of the iconic Ford GT.

But the real trend among exotic performance cars was more subtle. Not only that but it tells us something about the future of EVs (electric vehicles). Honda

showed its own reborn icon, the NSX, but has reinterpreted it supercar as a three-motor hybrid. It’s a contemporary performance engineering approach far more in line with the hybrid hypercar holy trinity of LaFerrari, McLaren P1 and Porsche 918. But where their price tags are $1m-plus, the NSX will be more like $150,000.

Yes, that’s still a lot of money, but it positions the NSX in a new, real-world exotic sports car environment – a place where price, performance and poor taste are 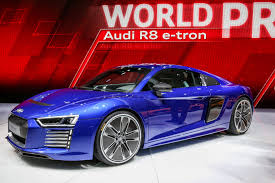 restrained and the cars better for it – alongside BMW’s i8 and the Audi R8 e-tron unveiled at Geneva. Audi has gone a step further than Honda and BMW and given the R8 e-tron a pure electric driveline – producing 456bhp and a range of 280 miles for not much more money than the Honda. And not an engine in sight.

This reflects a rapidly growing trend – EVs are going upmarket. As everyday small-to-medium size cars like the Nissan Leaf and Renault Zoe, EV sales remain minimal. Even BMW’s avant-garde, brilliantly engineered, brilliantly marketed and affordable i3 isn’t shifting. So the carmakers are putting EV tech into high-end models and positioning them as the top variants – as in the new Audi Q7 e-tron SUV shown in Geneva, with a hybrid drivetrain. BMW, Range Rover and Volvo have all chosen this strategy already.

Audi has admitted that the pure electric technology in the R8 e-tron will be introduced in at least one more mainstream model in a couple of years or so – most likely a medium-sized SUV with a target of a 300m-plus range. No coincidence that Tesla, which has shaken the establishment with its battery-only performance and range, will have introduced its first SUV by then. This part of the market will be the epicentre of EV growth.

After publicly doubting battery-only EVs Audi has done a U-turn and is now clearly committed to them. It is effectively leading VW Group’s EV efforts, and may well become the leading EV OEM bar none, because it operates in the premium space where the additional cost of electric technologies can be absorbed, yet has mass-volume appeal. Audi could be a catalyst to widespread EV acceptance and adoption.

In this sense Geneva 2015 is all about the real world. Look past the roped-off stands, fake tans, carbon-fibre and colossal combustion engines and there’s an electric future coming into focus.