So the Bentley SUV will be made, and not in Bratislava alongside other VW Group cars. Bratislava’s an intriguing place. I first went there 20 years ago to launch the latest Toyota Corolla, when the ancient cobbled streets were still lined with lovely old Tatras and McDonald’s hadn’t arrived. It’s nicer than Crewe for sure, but Britain is where the car needs to come from. Otherwise it’s a German-owned, Czech-built car with shared VW Touareg, Audi Q7 and Porsche Cayenne underpinnings and a British badge.

The concept of a Bentley SUV has been much debated but it won’t be an issue if it’s seen as having a British, handcrafted core. Forget the SUV tag – Bentley surely won’t be letting this distinctly un-British acronym anywhere near the car. But a practical luxury car is part of the tradition of British motoring – think shooting brakes, plovers’ egg picnics and Pimms; Glyndebourne, Henley, country estates, polo and the grouse season. Putting a bespoke picnic hamper together with four-wheel-drive and a bootload of status makes complete sense. Historically Bentleys were used to pound around victoriously for 24 hours at Le Mans, to equip Fleming’s original James Bond, and to take gentlemen adventuring in dusty, far-off places. The new car is a far better brand fit than for Lamborghini, which has also shown an SUV prototype, or even Porsche, despite the fact that its fortunes have been transformed by the Cayenne. And it’s something the Rolls-Royce brand simply can’t stretch to.

But if this Bentley is to make complete sense it needs to express its Britishness clearly. Traditional British luxury design is understated, timeless, with simplicity of lines and natural materials. It has design honesty. From E-Types to Burberrys, the best British products have always had a functional beauty.

The market for the new Bentley will inevitably be primarily in Asia and the Middle-East, where luxury is designed to be displayed. It is gilded and gauche. Bentley needs the volumes these markets offer but if it designs the car specifically to appeal to their tastes it will undermine the brand. It must fundamentally appeal to British tastes even if UK sales are only a fraction of the total. When the production car is revealed, put it to this test – if you can’t think of a credible British celebrity ambassador for the car they won’t have got it right.

Designing this car is a difficult task. The EXP 9F concept shown last year to widespread disapproval was an exercise in seeing how far the expectations of Bentley styling themes could be pushed. Bentley got its answer but should not simply apply the existing DNA to an SUV-type body as Porsche did by bolting 911 features onto the original Cayenne. The new Bentley should be contemporary, daring even. But it should say ‘ British’. Effortlessly. The execution will be everything. 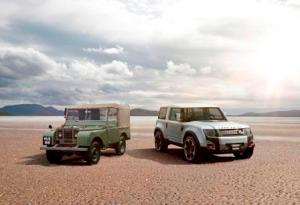 I read today that the replacement for Land Rover’s Freelander will drop the model name and become part of a growing Discovery family. So far so simple – Land Rover already has a confusing brand and model name structure and that’s about to get much more complicated, with the reported intention to diversify its combined Land Rover/Range Rover offering to as many as 15 distinct variants. That could be stretching it a bit.

Time was when Land Rover meant the iconic Defender, now 65 years old and about to be retired in its current form. Then came the Range Rover, which originally had hoseable seats but now comes with ones which will massage you and competes with luxury limousines from Cheshire to China. And as it’s gone upmarket it’s become a brand in its own right. However, the car shares the brand’s name, whereas the models which have moved into the space underneath the flagship, the Sport and the Evoque, are separately identified. Meantime Land Rover’s Discovery has also become something of an icon.

So a strategy of rationalising a rapidly growing range into three model lines – Defender, Discovery, Range Rover – will make sense. It’ll also help maintain the integrity of brands which could be at risk of being diluted by the race for sales growth and the drive upmarket.

However, it doesn’t tackle the issue of an increasing overlap between the models. There is little, it seems, that the new flagship Range Rover does that the new Sport can’t do. At the same time the new Sport will have a seven-seat option which, combined the availability of a four-cylinder diesel engine, jars with its Sport tag – surely practicality should be the preserve of the Land Rover brand, where the Discovery already does practical-meets-cool. Even more so when the next generation, based on the Range Rover, will have the inherent quality at the top end to satisfy all but those who simply must have the Range Rover badge. There’s even talk of a seven-seat Evoque, a car whose success is based purely on style over practicality, to the extent of publicising that it was designed with the help of an ex-Spice Girl.

Of course Land Rover can charge more for products with the Range Rover badge and achieve bigger margins. But, especially when you have brands founded on integrity and now luxury, it’s a dangerous play to let sales growth and diversification steer the brand rather than the other way round.

Land Rovers and Range Rovers are fantastic products but there are few bad cars these days. Mainstream carmakers have introduced premium products, and premium brands have launched downsized models. An already super-competitive market has converged. As a result, brand differentiation and relevance has become the key to consumers.

Land Rover and Range Rover has always had more of that than any other car company. Its challenge now will be to preserve it.